Mark D. Sikes… the king of blue and white.  If you’re on Pinterest actively pinning interior design inspiration, chances are you have seen one or more of his designs.  His work is utter blue and white perfection.

There’s something about a blue and white color combination that I have always been drawn to.  For me personally, I am really inspired by Asian-influenced blue and white antiques or replicas.  I have been infusing some of these accents into our living room, so I wanted to share.

It all really started with this side table.  I like it — and it does have some Asian influence, as it is sort of a faux-gilded bamboo style.  But I was walking through HomeGoods one evening and saw a blue and white garden stool on deep, dark, dirty discount.  I committed the cardinal sin of shopping at HomeGoods and left without the stool…you know, the one that was on major sale…and then proceeded to think about it for the next two days.

I asked Grey what he thought about adding a little blue and white to the space, and he was all for it.  So after staying up for half the night praying that by some stroke of luck the stool I wanted was still there, I woke up bright and early the next day and got to HomeGoods when they opened.

I had a mirror that I was going to be returning (too small), so armed with that, I walked down the clearance furniture aisle… 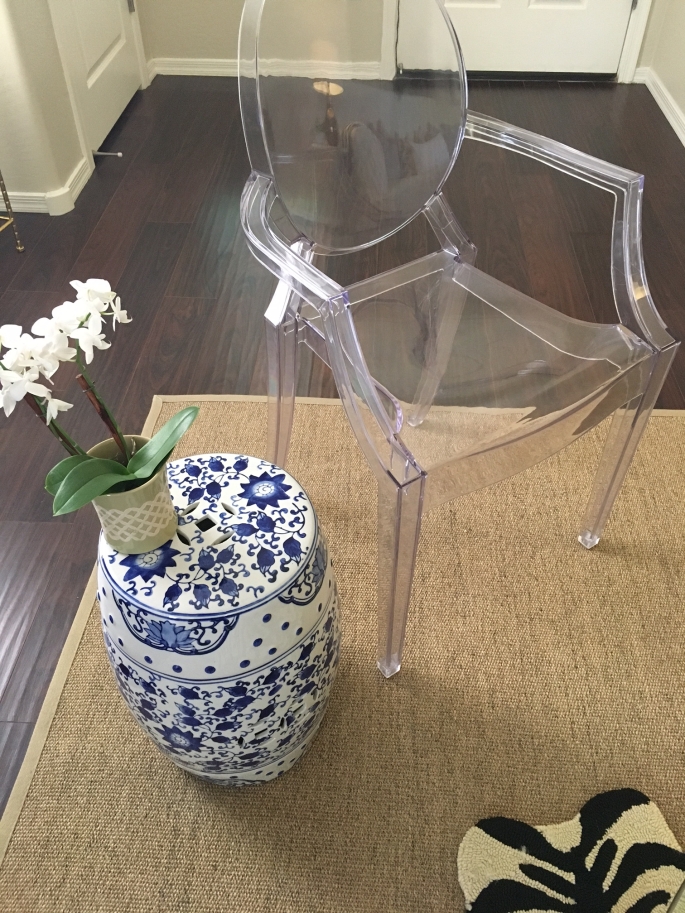 I love it with the zebra rug.  So.  Much.  It just has a really casual vibe that I appreciate in this space.  Plus it doubles as seating.  The other table is still in that spot in the background — it’s not bugging me there, and I don’t really know what to put on it at this point, but it’s fine for now.

That orchid is pretty epic and my husband picked it out at Trader Joe’s.  The pot that it is in is one that I bought from an antique shop ages ago.  It’s what started this whole blue and white thing for me!

This cachepot was another steal from HomeGoods…I think I paid $12 for it.  It has a cute lid, or…

It looks especially pretty with hydrangeas.  🙂

All of these blue and white shenanigans prompted some rearranging (my favorite!)… 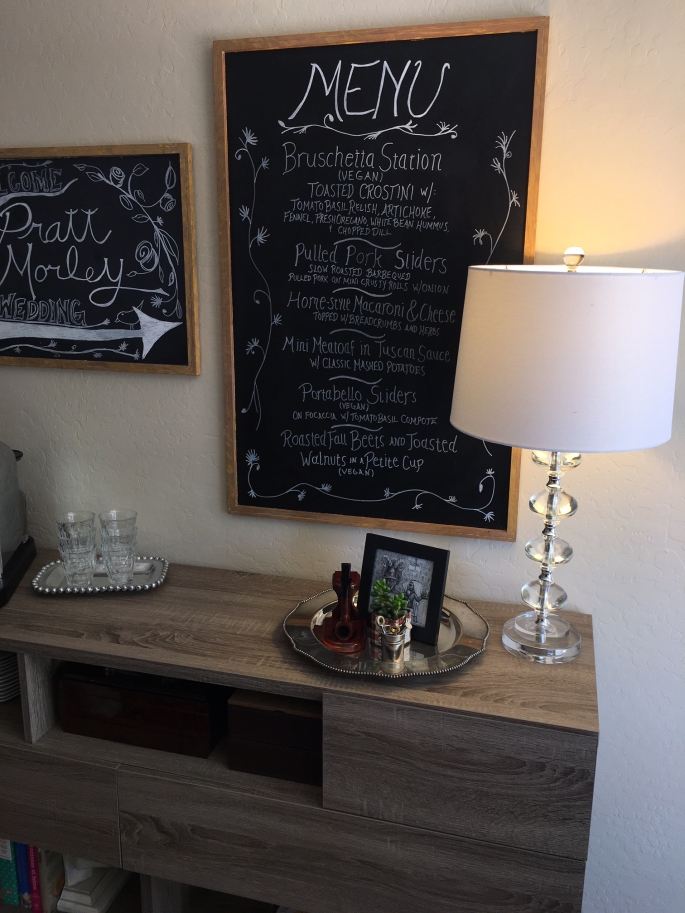 I moved the living room lamp into the kitchen, which I am super excited about because I have always loved the look of soft lamp lighting on a buffet.  This piece of furniture was a Walmart find and stores a bunch of stuff — all of my husband’s pipe accessories and tobaccos, plus all of my Spode dishes.  It’s so nice to eat in here and have just the lamp and the chandelier on while it’s dusk and we’re having dinner.

This space needed a lamp, so I brought this one out of my office and I really like it.  I feel like it adds just a touch of masculinity that the living room needed after adding the feminine touches of blue and white!

Are you loving blue and white as much as I am?

6 thoughts on “Blue and White Foreva”

I’m so glad that you stopped by!  Simplicity inspires me.  Whether I am shopping my house, gathering people together for a meal, or puttering on a Monday morning, there is peace at the heart of it.  If you are a “perpetual nester” like me or if you’re just leaning in to loving the home you have, I hope you find something that inspires you here.  Welcome!